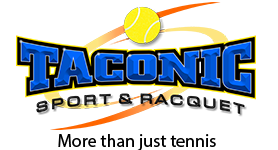 Awesome news!!! We have now converted two of our outdoor tennis courts into 4 outdoor pickleball courts!!! That means we now offer 4 indoor courts and 4 outdoor courts to any local pickleball players. TSR is the only place in Dutchess County that’s offering people a place to play this growing racquet sport.

Check out this video of our pickleball players in action!!!

Pickleball originated at the home of Joel Pritchard in the Seattle, Washington, area
in 1965. The game began as a family activity when Mr. Pritchard and his houseguest, Bill Bell, discovered that there wasn’t enough good badminton equipment for the two families to play. After modifying rules and replacing rackets with wooden paddles, they developed this new game. The name came from the Pritchard’s cocker spaniel, “Pickles”, who kept running off with the ball whenever it landed off the court. Slowly, pickleball spread among neighbors and friends, and in 1972 a corporation was formed to protect the new game. During the 1970s the popularity of the game grew in the Seattle area, where it was used in high school and college physical educational programs and the park and recreation association. Though it has been around for about twenty years, the last five has seen tremendous growth. The United States of America Pickleball Association is the official promoter and governing body for the game.

New to TSR? Schedule a FREE 30-minute hitting session with a tennis or pickleball pro.